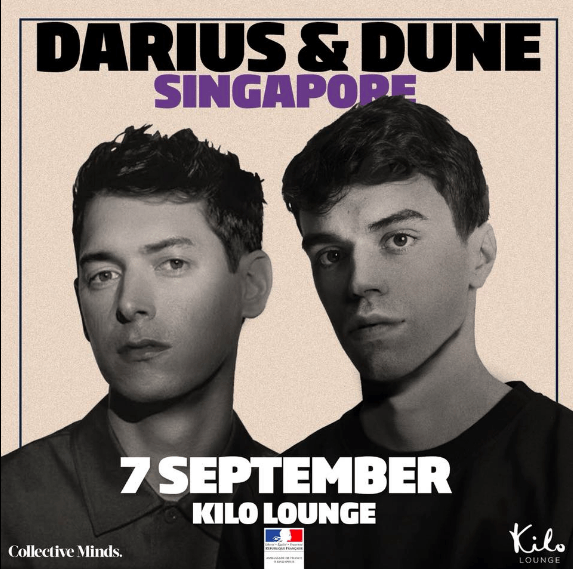 Come get your dose of the French Touch as it makes its way back to Singapore! Roche Musique’s finest purveyors Darius and Duñe tear up Kilo Lounge once again this September!

Tickets go on sale this Wednesday

Darius is a french artist known to be one of the supporters of a new kind of House. Inspired by Funk and Disco sounds, Darius adds some complexity in his music, which places him alongside the most respected producers of the moment.

Darius is among those young artists who make you realize how much the electronic musics cene has entered a new era. Having started off with Roche Musique, and now signed on Animal63, Darius uses his machines like others once played their instrument to express their time and their emotions. His first album ‘Utopia’ is entirely electronic, but reminds us of great soul or psychedelic records as much as it does electro music. This perhaps is due to the fact that the man behind it does not think in terms of genre and technological innovation but simply want to invigorate his generation despite the darkness of our time.

His debt album ‘Uptopia’ has a minimal sound palette and striking coherence. It’s an album you listen to in one breath.

Half of the duet Saje, which last Ep was released in January on Roche Musique, Vincent goes now ahead with his solo project, Duñe. With a minimalist touch that characterizes him, lead by a mesmerizing voice, Duñe invites us to a journey where colors and forms let dawn a rich and delightful horizon.

For more information and to buy a ticket, just click here