On 5 October, the workshop titled « Ethics in AI – Governance and Practice » was held at the Embassy of France in Singapore, co-organized with the Singapore Computer Society. The workshop aimed at reinforcing the exchanges about the ethical aspects of the use of Artificial Intelligence (AI) by French and Singaporean companies.

The event was part of a series of exchanges between Singapore and France on AI, notably with a first bilateral scientific workshop on AI held in Singapore in June 2018 with the participation of Cédric Villani, Fields Medal winner and author of the French strategy on AI that was presented to President Macron in March 2018. Subsequently, during Prime Minister Lee Hsien Loong’s visit to France in July 2018, a Memorandum of Understanding was signed between the French National Center for Scientific Research (CNRS), the French National Institute for Research in Digital Sciences (Inria), and the French National Institute for Health and Medical Research (Inserm) and AI Singapore.

More recently, the France-Singapore Roadmap for Deepening Cooperation in Artificial Intelligence was endorsed in November 2020 by the French Secretary of State for Digital Transition and Electronic Communications, Cédric O, and the then Singaporean Minister for Information and Communication, S Iswaran. The objectives of this roadmap are to pave the way for further actions between our two countries at different levels.

This meeting also echoed the Global Partnership on Artificial Intelligence (GPAI), a French-Canadian initiative that Singapore joined as a founding member when it was created in June 2020. In November 2021, a second GPAI summit will take place to anchor the partnership as a key international body for thinking and recommendations on AI and will present France’s vision to further strengthen its legitimacy by expanding it beyond its current members, including emerging and even developing economies. 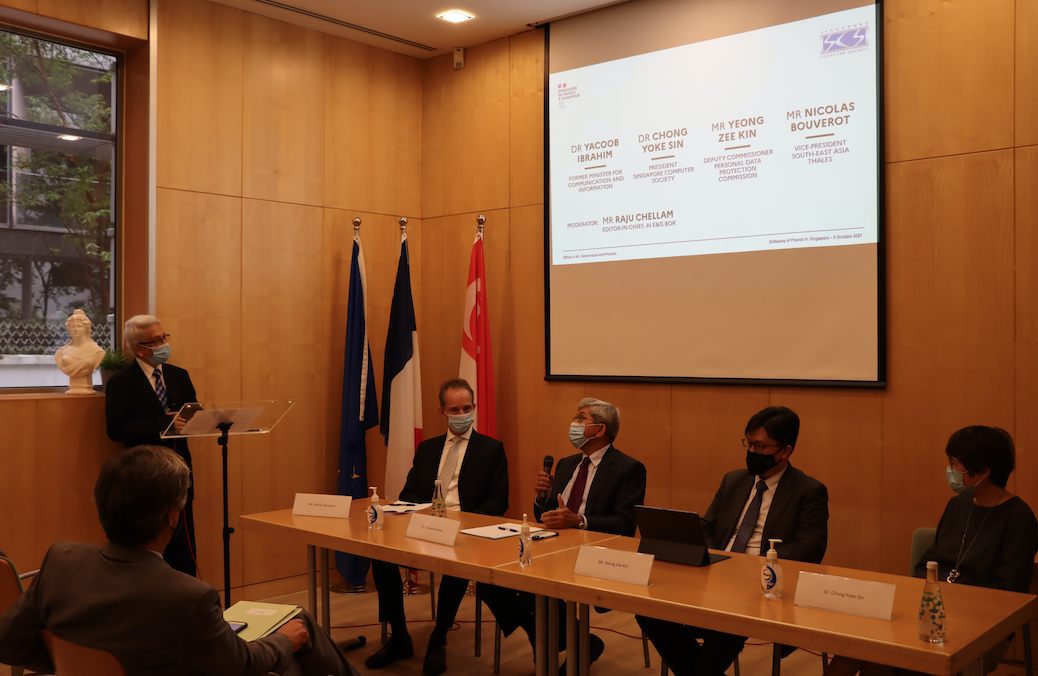 At the academic level, exchanges on AI are also very dense as shown in Singapore’s “National AI Strategy” published in 2019 where France is identified as a key partner for scientific cooperation and as highlighted more recently at the second meeting of the France-Singapore Joint Committee for Science and Innovation (JCSI) which was virtually held on 24 June 2021 in the presence of France Minister of Higher Education, Research and Innovation, Ms Frédérique Vidal, and Singapore Deputy Prime Minister, Mr Heng Swee Keat. At this meeting, the positive scientific evaluation of the five-year programme called “DesCartes”, which is about intelligent modelling for decision-making in critical urban systems and is dedicated to hybrid artificial intelligence and starts to implemented from October 2021 by the CNRS subsidiary at CREATE, was officially announced.

Finally, at the business level, many exchanges have also been developed in recent years, such as meetings organized by the “Live with AI” foundation, which brings together leaders, researchers, and decision-makers from Asia and Europe to lead working groups and research projects on the positive impacts of artificial intelligence on our society.