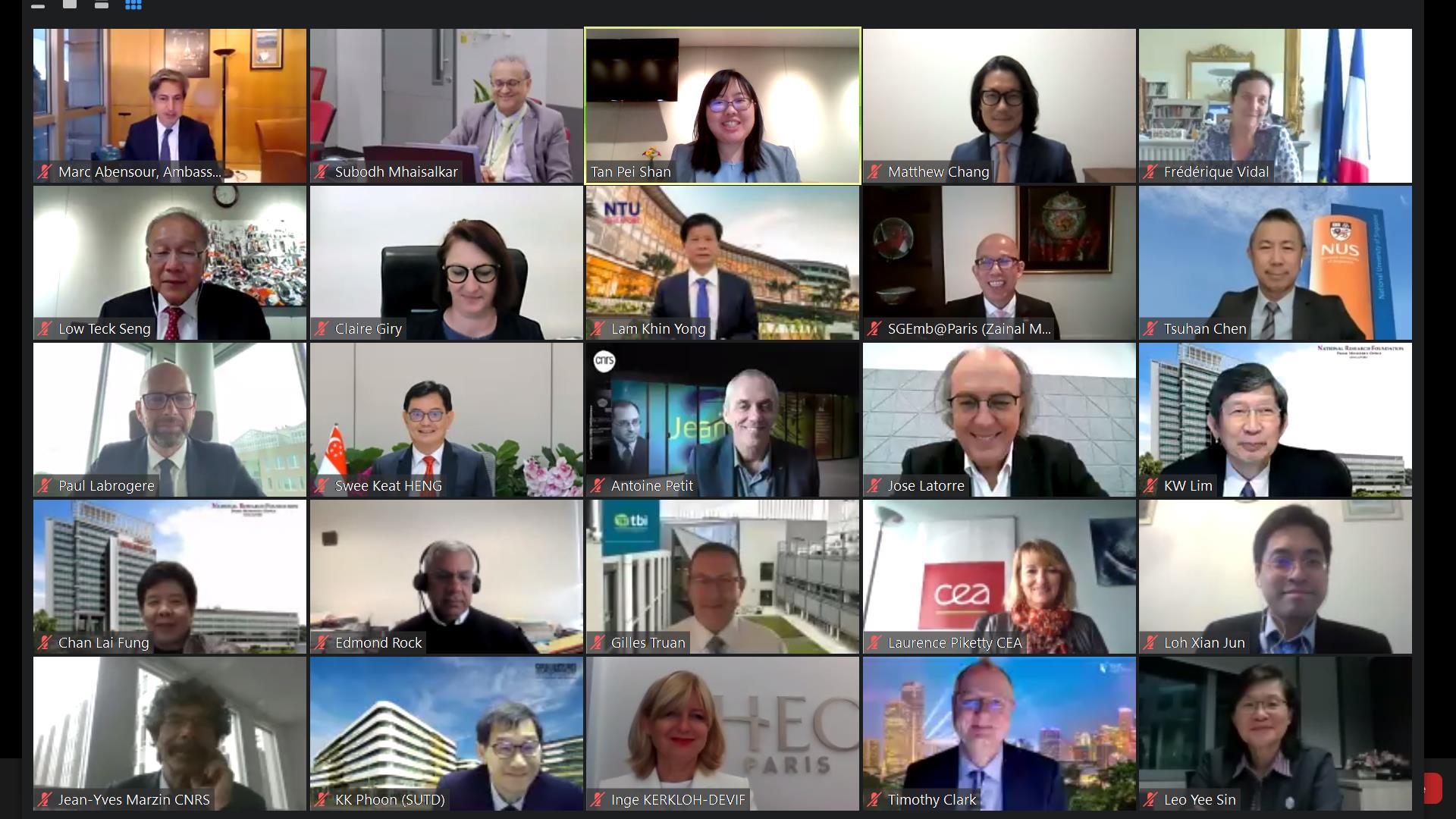 The France-Singapore Joint Committee on Science and Innovation (JCSI) happened on 24 June 2021. This second meeting was held online, following the initial meeting in Paris in November 2019. High-level representatives from the relevant ministries, funding agencies, major research institutions and companies of both countries as well as the two embassies took part in the annual event.

The meeting was co-chaired by the CEO of the National Research Foundation Singapore, Prof Low Teck Seng, and by the Director-General for Research and Innovation of the France’s Ministry of Higher Education, Research and Innovation, Dr Claire Giry, who shared updates on the research and innovation strategies of both countries. This 2nd JSCI edition was in particular focusing its exchanges on four promising fields for the bilateral cooperation: circular economy, synthetic biology and agrifoodtech as well as quantum technologies.

Singapore’s Deputy Prime Minister, Mr Heng Swee Keat, and France’s Minister for Higher Education, Research and Innovation, Ms Frédérique Vidal, met virtually before attending the 2nd JSCI edition and exchanged their views on science, technology and innovation policies, international collaborations and related issues. During the JSCI meeting, they were briefed about the latest cooperation updates on areas of mutual interest such as health and infectious diseases, artificial intelligence, nuclear safety, space and technology partnerships between start-ups.

The French National Centre for Scientific Research (CNRS) and its subsidiary in Singapore CNRS@CREATE announced the approval by NRF of the DesCartes programme as part of the Campus for Research Excellence and Technological Enterprise (CREATE). The ambition of this 5-year programme is to develop a disruptive, generic and multi-purpose cross-disciplinary tool based on AI-Physics-Engineering-Human centric to support and empower decision-making in urban critical systems in harmony with the society.

Enterprise Singapore (ESG) and French Public Investment Bank Bpifrance shared the promising results and the perspectives of their collaboration which supports the technology partnerships between start-ups from Singapore and France.

The French Institute for Radiological Protection and Nuclear Safety (IRSN) presented the cooperation with Singapore Nuclear Research and Safety Initiative from the National University of Singapore on radiobiology, radiochemistry and nuclear safety.

Four Memorandums of Understanding (MOU) were signed during the 2nd JSCI meeting between Singaporean higher education and research institutions and their France counterparts, further strengthening the bilateral relations between the two nations. A MOU signed by Singapore Management University (SMU) and French Business School HEC Paris will set a strategic partnership in innovation and entrepreneurship to pursue global incubator, academic program and research collaborations. Singapore’s Nanyang and Technological University (NTU) and the French Institute of Research and Technology SystemX extended their strategic collaboration to address issues around data driven approaches to circular economy & industry energy efficiency, autonomous mobility and electromobility. NTU Singapore also signed a new MOU with French Alternative Energies and Atomic Energy Commission (CEA): this partnership aims to promote joint research activities including academic exchanges to build talent in the field of magnetic fusion for the development of clean energy. A new tuition-free and innovative coding school is set to be launched in Singapore thanks to a MOU signed between France’s Ecole 42 and Singapore University of Technology and Design (SUTD).

Singapore’s Deputy Prime Minister, Mr Heng Swee Keat, said: “Singapore and France have a long-standing and strong partnership in the area of science and innovation. At the 2nd meeting of the Joint Committee on Science and Innovation, we noted the good progress. We commit to deepening our partnership in areas including pandemics, sustainability, and clean energy; and to promote greater collaboration among companies and research institutions on both sides. I am confident that these initiatives will create value not only for both our countries but also for the global community.”

France’s Minister of Higher Education, Research and Innovation, Ms Frédérique Vidal, said: “Since its implementation in 2019, the Joint Committee on Science and Innovation, which I had proposed to Deputy Prime Minister Heng Swee Keat, has been a powerful accelerator of new collaborations between France and Singapore. In particular, the second meeting gave the opportunity to release the first programme between France and NRF CREATE dedicated to artificial intelligence in critical urban systems with the participation of 80 scientific experts from France and Singapore. It’s a major step for the cooperation in science and innovation between our two countries”.

Proposed by France’s Minister of Higher Education, Research and Innovation, Ms Frédérique Vidal, on the occasion of the launch of the France-Singapore Year of Innovation in January 2018, the Joint Committee on Science and Innovation was an initiative made public by Deputy Prime Minister and President of National Research Foundation Singapore, Mr Heng Swee Keat, at the closing ceremony of the France-Singapore Year of Innovation in March 2019.