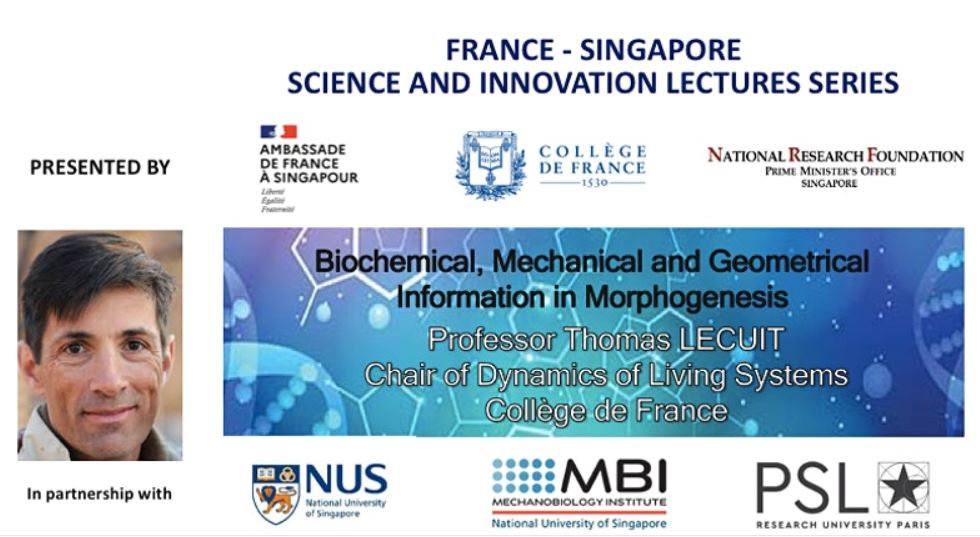 This lecture series is part of the France-Singapore Science and Innovation Lecture Series, jointly presented by the Embassy of France in Singapore, the Collège de France and the National Research Foundation Singapore and in partnership with Université Paris Sciences et Lettres (PSL), and is organised with the support of the newly established Joint Committee for Science and Innovation France-Singapore.

How is biological shape encoded ? The immense diversity of shapes at the cellular, tissue and organismal scales begs the question of whether general principles underlie the emergence of shapes. In other words, what is the nature of the information driving cell and tissue morphogenesis. This talk will address these questions in the context of Drosophila embryonic development.

It is well appreciated that genes encode shape though how they do so remains largely not understood. Exploring the dynamical features and mechanisms of tissue extension and tissue invagination in Drosophila gastrulation we will develop the notion that information rests on three pillars: genetics/biochemical activity, mechanics and geometry. We will contrast two general modalities of information flow driving morphogenesis: information executing a deterministic program and information resulting from self-organised, stochastic interactions across scales.

Thomas Lecuit did a PhD at the European Molecular Biology Laboratory (EMBL) in Heidelberg and received postdoctoral training at Princeton University. He became a group leader at the Developmental Biology Institute of Marseille (IBDM) in 2001 and Professor at the Collège de France in 2016. He is also Director of the Turing Centre for Living Systems, an interdisciplinary centre based in Marseille. He is a member of the French Academy of Sciences, Academia Europaea and the European Molecular Biology Organization (EMBO). He is deeply interested in how the tissues that form our organs acquire and maintain their architecture dynamically, and has special expertise in the physics and modelling of embryonic development. He has been an editor of Development since 2008.