In his speech during the ceremony, HE Mr Marc Abensour said: “We are honouring today three key persons who have played a meaningful role in the response strategy to the Covid-19 pandemic that has been successfully implemented in Singapore, making the city-State one of the countries worldwide which has managed the crisis in a most efficient way for the benefit of its citizens and residents”.

Singapore’s Chief Health Scientist, Professor Tan Chorh Chuan became a nephrologist after his medical training at the National University of Singapore. His dedication to his chosen profession earned him to rise through the ranks to assume the position of Dean of the NUS Faculty of Medicine and later Director of Medical Services, Ministry of Health from 2000 to 2004, where he was responsible for leading the public health response to the 2003 SARS epidemic.

Professor Tan Chorh Chuan was also the President of the National University of Singapore and gave a strong impetus to academic and scientific exchanges between France and Singapore, notably by supporting the creation of several joint laboratories with the French National Centre for Scientific Research (CNRS).

Professor Leo Yee Sin, Executive Director of the National Centre for Infectious Diseases (NCID) graduated in 1983 with a medical degree from the National University of Singapore (NUS) and picked up a Master of Medicine and MRCP in 1989 and Master of Public Health in 2013. Her keen interest in infectious diseases and public health, which are not mutually exclusive, has made her a much sought-after expert and speaker in the domain.

Professor Leo Yee Sin played a crucial role in France and Singapore’s bilateral scientific working group on infectious diseases which was set-up in July 2020 by being the chairperson for the Singaporean side. Upon identifying the complementarity of the efforts carried out by France and Singapore in terms of research and clinical trials, she has been able to synthesize them into the working group’s proposals.

Professor Laurent Rénia is the Professor of Infectious Diseases and Director of the Respiratory and Infectious Diseases Programme in Lee Kong Chian School of Medicine, Nanyang Technological University (NTU). He is also a Professor in the School of Biological Sciences at NTU and a Senior Fellow and Principal Investigator at A*STAR’s ID Labs. He also holds an adjunct position with INSERM. In addition to the high-quality scientific research he conducted in France, he distinguished himself on numerous occasions as a reference for the Singaporean authorities. 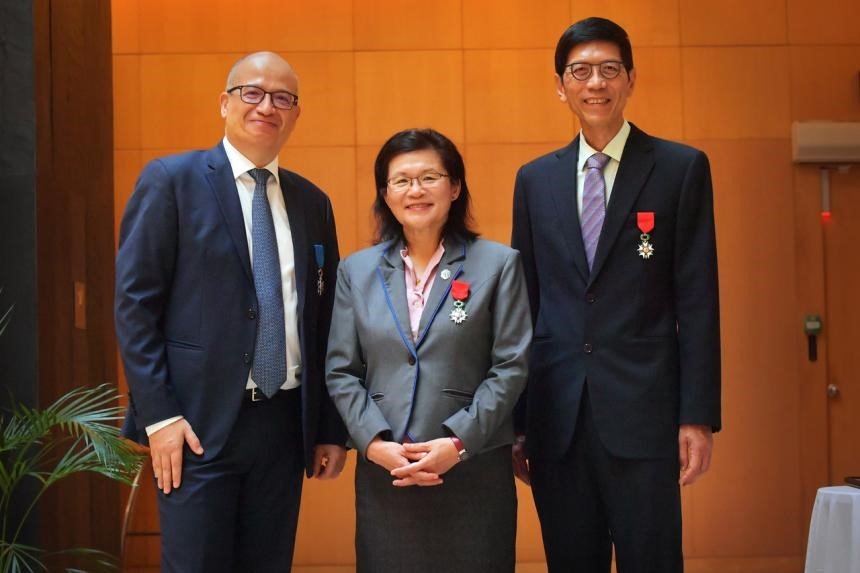 Professor Laurent Rénia was appointed to several expert committees that make recommendations to the government on Singapore’s COVID-19 vaccination strategy.  Having played a part in the Scientific Committee created by the French Embassy during the health crisis, Professor Rénia contributed greatly to informing and reassuring the French community in Singapore on the evolution of the pandemic. His work is in line with the agenda of reinforcing scientific cooperation between France and Singapore.