“Titane”, which won the Palme d’Or at the Cannes International Film Festival 2021, is released at Cathay Cineplexes and The Projector on 24 March.

Synopsis: “Titane” follows the story of a woman named Alexia (Agathe Rouselle), who was injured in a car crash as a child and had a titanium plate installed in her head. She grows up relating to automobiles more than people, abstracted from standard moral principles and relationships. When a negative encounter with a romantic suitor leads her to a raunchy killing spree, Alexia bounds between intense, violent outbursts and moments of surreal comedy.

Titane: A metal highly resistant to heat and corrosion, with high tensile strength alloys, often used in medical prostheses due to its pronounced biocompatibility. 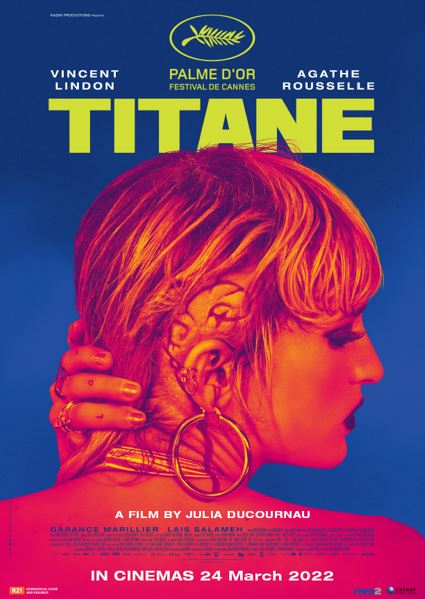 “I sensed I was facing a very complex puzzle, with dense matter that I clearly needed to simplify. But I had to be careful or I’d risk losing the existential scope I was aiming for. It was a real balancing act. To give “Titane” its definite shape, I honed in on the character of Vincent (Vincent Lindon) and his fantasy: this idea was through a lie, you can bring love and humanity to life. I wanted to make a film that initially may seem “unlovable” because of its violence, but then we grow deeply attached to the characters, and ultimately we receive the film as a love story. Or rather, a story about the “birth of love” because here, everything is a question of election “