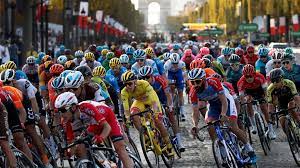 The Tour de France is an annual men’s multiple stage bicycle race primarily held in France, while occassionally passing through nearby countries. This grand tour consists of 21-day long stages over the course of 23 days.The 2021 edition of the Tour de France will start on 26 June till 18 July. This year, the Tour will kick off in Brest on 26 June and will wrap up in Paris Champs-Élysée on 18 July.

This year, familiar faces such as Pogačar Tadej, Roglič Primož and Van Avermaet Greg will be competiting again for the Tour de France’s prize money and the opportunity to wear the yellow jersey on the final day in Paris.

For those who are keen to watch the Tour de France 2021, you will be able to catch it live on NBCsports and Eurosport.