For the very first time, the initiative “EU comes to your School” was organized in Singapore with the mission of meeting about 10,000 students from the 21 Singaporean participant schools. It consists in a series of meetings between the ambassadors of 17 EU Member States and students from the secondary participant schools. This event was initiated by the Embassy of Germany which received the support of the French Embassy considering the successful experiences in other Asian countries.

The purpose of “EU comes to your School” consists in the presentation of multiple aspects of the EU to Singaporean students and to reinforce the relationship between Europe and Singapore by involving the new generations. This new operation also increases awareness among students about the role of Singapore as coordinator of the relationships between the EU and the ASEAN but also about the European elections which will take place from May, 23 to May, 26.

During the launching event, two students of each school participated in a panel discussion with the Minister Ong Ye Kun and the Ambassadors of Finland, France, Germany, Italy and Romania about the importance of the mastery of foreign languages in a globalized world. 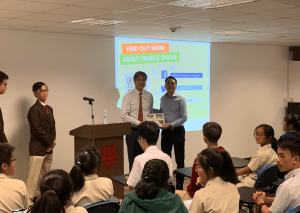 In the context of “Eu comes to your School”, the French Representation visited several Singaporean secondary schools. French Ambassador Marc Abensour started by meeting the students of the Hwa Chong Institution on May, 21 followed by Ms Ariane Trichon who came to the Crescent Girls’ School on May, 22 in order to present the assets of the EU with a focus on France and its relationship with Singapore in a question-answer format.

The “EU comes to your School” initiative was a valuable event for students who learned more about specific aspects of the EU, the assets of studying in France as well as its relationship with Singapore by highlighting the strong presence of France in the country. Thanks to the high participation of schools and their students, this edition turned out to be a true success. We are already excited about the next edition to meet new students and prepared for enlightening exchange!